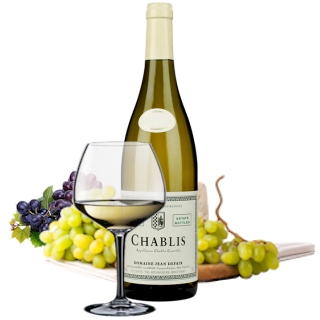 Jane Hunter is the driving force behind its ongoing success. In 1995 Hunter's Wines was one of the first wineries to achieve ISO accreditation. Not surprisingly, Jane has been described by the London Sunday Times as the star of New Zealand wine. Jane was awarded an OBE for service to the wine industry in 1993, recieved an Honorary Doctorate of Science from Massey University for her outstanding contribution to the industry in 1997 and in 2003 recieved the innaugural Wine & Spirit Competition Women in Wine Award (UK). 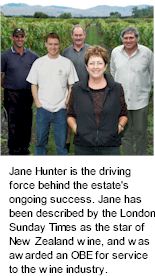 A fiercely independent, family-owned winery, Hunter's Wines was the combined dream of Ernie and Jane Hunter. It was the inspired foresight of the ever-enthusiastic Ernie, New Zealand’s unofficial wine ambassador, which recognised the vast potential of Marlborough as a premier wine-growing region. However, only five years after producing his first six award winning wines (in fact, the first six Hunter’s Wines to emerge), he was tragically killed in a motor accident at the age of 37.

In the aftershock of this, Jane, herself a highly qualified viticulturist with a long family history of Australian grape growing, resolved to build on the vineyard s proven potential. Through her strong determination, together with the talents of Chief Winemaker Gary Duke and eminent Australian oenologist Dr Tony Jordan, Hunter's Wines has achieved an enviable reputation both in this country and in the wine capitals of the world.

This list of industry accolades is impressive indeed. Quality not quantity was Ernie Hunter's catch cry and this philosophy lives on to this day. Since 1987 Jane has been owner, viticulturist and managing director of Hunter's Wines. During that time, the vineyard has expanded to 4 times its original size. Approximately 65% of this production is exported, particularly to the UK. 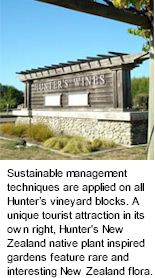 Jane was brought up in South Australian wine country. Her father grew grapes in the Riverland, just north of the famous Barossa Valley. After a short period studying animal husbandry, Jane changed her specialist area and is now a highly qualified viticulturist, with an Agricultural Science degree from the University of Adelaide. Jane was initially employed by Montana as national viticulturist, in charge of all Montana vineyards, organising research and development and liaising with managers and contract growers.

In 1983, the late Ernie Hunter and Jane began a fledgling winery near Blenheim using borrowed gear from an old cider factory in Christchurch. Four years later, after Ernie s sudden death, Jane took over the management of Hunter's Wines. The winery has continued to grow in size, annual output and reputation. To date, Hunter's Wines has won more than 100 gold medals at wine competitions, including London, Sydney, Hong Kong, Switzerland Australia and New Zealand.

Sustainable winegrowing New Zealand was developed with the aim to be the best environmental programme for producing wine grapes in the world. Vineyards get audited every two to three years to ensure standards and regulations are being met and that the methods being used are the safest possible to the environment and human health. All Hunter’s vineyards are run under sustainable certification, meeting all requirements set out by Sustainable Wine Growing New Zealand with the focus to: Protect the vineyard environment. The people that work and live within and around the vineyard. The people who consume wine made from grapes produced in the vineyard.

Sustainable management techniques are applied on all Hunter’s blocks, using carefully monitored and controlled irrigation, weeds, pests and disease management. A unique tourist attraction in its own right, Hunter's New Zealand native -plant inspired gardens feature rare and interesting New Zealand flora. The aim is to continually work towards improving all aspects of our performance in terms of environmental, social and economic sustainability in our vineyards to produce premium quality fruit with true environmental integrity.