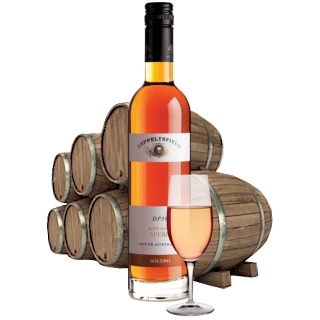 Magus Of Murrumbateman»
Ken Helm A.M. received the Order of Australia for his work with Riesling, for his contribution to the Australian wine industry, for his support of cool climate wine producers and service to the Canberra community. Helm placed the Canberra region firmly on the map for world class wines after his inaugural 1977 release won significant international accolades. Ken's flagship wines are Riesling and Cabernet, he retains strong ties with eminent wine makers around the globe. Trips to the vineyards and wineries of Mosel, the Rhine valley and Bordeaux provide new inspiration and contribute to the development of his Canberra wines. In 2000 Ken instigated the Canberra International Riesling Challenge, his continuing role as chairman allows him to constantly keep abreast of new developments in.. Meet one of our nation's most peer respected winemakers»
In Vino Veritas»
Marlborough viticulture owes much to the import of emigres from war torn Europe. Many were skilled fruit growers while others were passionate winemakers. They quickly discovered the magical affinity between aromatic white varietals and the mistral valleys of Te Wai Pounamu... Match a meal with maria»
Helm
1 - 6 of 6
1
Watch Helm on

Helm is a boutique cool climate winemaker, one of the first ever commercial operations in the Canberra region

Ken and Judith Helm started the vineyard, winery and cellar door in 1973 and have built it into one of the leading wineries in the Canberra District. It continues to be a family affair with all of the family (including recent additions) playing an integral part in the business. The winemakers are Ken Helm and daughter Stephanie, who are fourth and fifth generation descendants of German vinedressers from the Rhineland, who established vineyards near Albury and Rutherglen in the 1860s. Ken's flagship wines are Riesling and Cabernets and he has connections with Riesling makers from all over the world, eg: Dr Loosen and Katharina Prüm in the Mosel and Dr Alexander Kohen from the German Wine School in Koblez. Trips to the vineyards and wineries of Mosel, the Rhine valley and Bordeaux have fine tuned the Helm wines. In 2000 Ken instigated the Canberra International Riesling Challenge and his continuing role as chairman allows him to constantly keep abreast of new developments in Rieslings around the world. 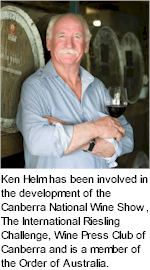 Riesling has been Ken's passion for 30 years. The first wine he produced in Canberra in 1977 was Riesling and this won the winery's first show award. The next 30 years have seen some outstanding Rieslings produced at Helm wines, bringing over 50 awards and wine writer's rave reviews. Helm Wines has become renowned for its Classic Dry style of Riesling however recent years have seen the winery introduce a Half Dry style of Riesling which has a hint of sweetness. These two contrasting styles show the diversity that can be accomplished with this classic and often understated variety.

The winery uses a combination of modern and traditional winemaking equipment which allow for the consistent production of high quality premium range of reds and whites.Helm wines have attracted an impressive 30 years of wine show awards from every major show and wine critic in Australia.

Winemaker Ken Helm (AM) was appointed a Member in the General Division of the Order of Australia in the Australia Day 2010 honours. The award recognises Ken's service to the Australian wine industry as a winemaker, through the promotion of the Riesling white grape variety and as a supporter of cool climate wine producers and to the community of the Canberra/Yass region. 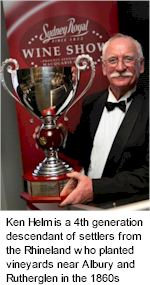 Wines of premium quality have been consistently produced for decades but Helm Wines is more than just a working winery. A visit to Helm Wines could not only involve wine tasting in the historic Toual School House, but also the trivia of wine, politics, history and perhaps a look behind the scenes on a guided tour of wine making (viticulture).

Cabernet Sauvignon, the classic red grape that thrives in the Canberra climate and soils. The wines have been a great success to Helm Wines. In 1984 the first gold medal and trophy to a Canberra wine was the 1983 Helm Cabernet Sauvignon. In 1988 the Helm Cabernet Sauvignon 1986 won the first gold at Royal Sydney Wine Show to a Canberra wine. In 1989 the move to blends saw the straight Cabernet Sauvignon cease production, except for Stephanie who produced her Cabernet sauvignon which in 1998 won gold and trophy at the Cool Climate Wine Show. The winery turned its attention back to Cabernet Sauvignon after a trip to Bordeaux Premium Growth wineries in 1999 by Ken, his son Matthew and grape growing neighbour Al Lustenburger. This trip assisted in the development of the recipe to make consistent premium Cabernets in the Canberra District. The award winning 2005 vintage was the first release using all the techniques of vine management and winemaking learnt in Bordeaux. The success of this vintage went far beyond all expectations, winning a silver medal in the London World Wine Awards and receiving praise from some of the top wine writers in Australia.

A quarter of a century of wine making and promoting, together with pioneering the development of many of the Canberra Region wine styles has been a passion for Ken Helm. He has been involved in the development of the National Wine Show, Cool Climate Wine Show, Wine Press Club of Canberra and in numerous promotional events for the Canberra region. Awarded by NSW Government in 1999 the Graham Gregory Trophy for a major contribution to the NSW Wine Industry. He instigated the International Riesling Challenge held at the Hyatt in Canberra in 2000. Ken was awarded the Wolf Blass Award in 2006 for contribution to the promotion of Riesling.